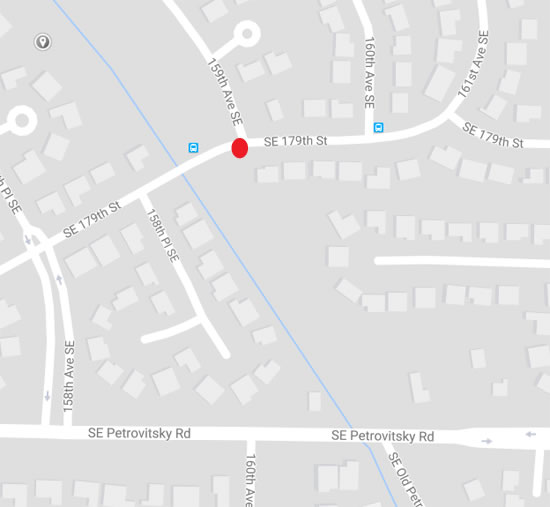 FCN Note: As best as we can tell, this accident occurred near Fairwood’s Candlewood Ridge Park on 179th.  Our condolences go out to this family and friends.

Shortly after 6pm on Monday, KCSO 911 received multiple calls about an accident involving a tree hitting a car in the 15900 BLK of SE 179st in unincorporated Renton / King County.  Callers reported hearing the sound of a crash and then coming out of their homes to see a large tree had broken off 10-15 feet above the ground and crashed down on a passing car.

When the neighbors rushed to the car, they found that it had fallen directly on the front passenger compartment of the vehicle.  Because of the size of the tree and where it fell on the car, they were unable to do anything for the driver or front seat passenger, but they were able to pull a young toddler girl from the back seat and comfort her until AID crews arrived.

When KCSO Deputies and Fire / AID crews from Renton arrived, the driver was pronounced dead.  Fire crews were able to cut the tree off the car and then had to cut the roof off of the car to free the passenger.

The passenger had obvious injuries to her lower extremities and possible internal injuries.  The Toddler had no obvious, major injuries, but was undoubtedly shaken up by the whole incident.  Both were taken to Harborview hospital.

Pending ID confirmation from the King County Medical examiner of the deceased as well as a positive ID on the passenger, the exact relationship of the three females in the car can not be confirmed by KCSO at this time.

The tree that fell was approximately 30 inches in diameter and tall enough the after snapping off 10-15 feet above the ground, was still able to go across two sidewalks and two lanes of traffic.  It is unknown if the tree was on public or private property.

King County Sheriff Major Accident Response Reconstruction Detectives will be investigating the accident.  At this point, there does not appear to be any fault from anyone involved.  It appears to be a very horrific and tragic accident related to the wind storm that was in the area at the time this occurred.

Renton to Host Annual Day of Service this Saturday