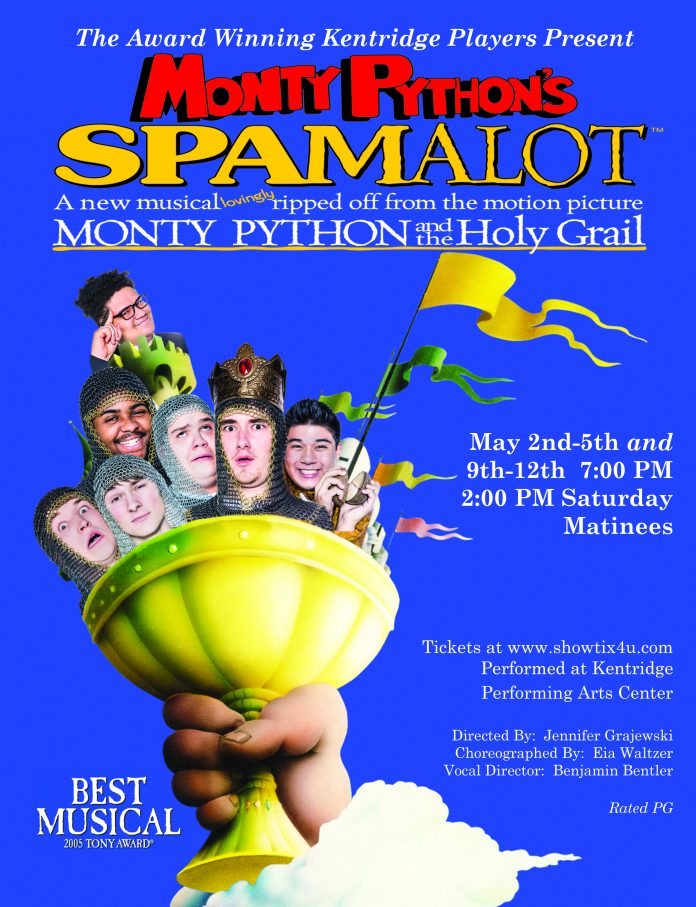 Rude Frenchmen, cancan dancers, the Lady of the Lake and her Laker Girls, Killer rabbits, catapulting cows, and the somewhat odd Knights who say “ni” are just part of the adventures and dangers awaiting King Arthur and his knights of the very round table in their quest for the holy grail.

Lovingly ripped off from the motion picture, Monty Python and the Holy Grail, Spamalot is the fresh Broadway hit and irreverent parody of the Arthurian legend. It was nominated for 14 Tony Awards, winning three, including Best New Musical for 2005. During its initial run, it was seen by more than two million people.

This production runs now through May 12 at the Kentridge Performing Arts Center.  Shows are Wednesday-Saturday at 7:00 pm and additional Saturday matinee at 2:00 pm.

Directed by Jennifer Grajewski, she has directed over 100 musicals in her career and is the resident Artistic Director at Kentridge High School and for At the Ridge Community Theatre.  The choreographer is Eia Waltzer and Vocal Director, Benjamin Bentler.

Disclaimer: Spamalot pokes fun at almost everyone and everything, even Broadway musicals. It is most appropriate for children 12 and older who can appreciate the unique Pythonesque sense of humor that –without apology – can appear cheeky, impertinent, irreverent, disrespectful, and sometimes just plain rude…but to the sophisticated and discerning eye, it is silliness raised to an art form and all good fun. But, please, if you are easily offended, take King Arthur’s advice and “Run away!”