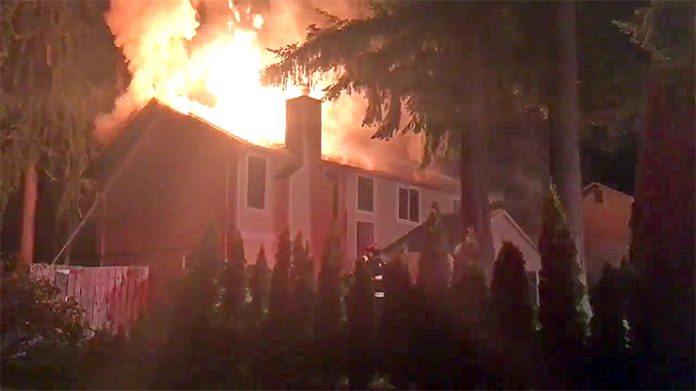 Heading into Fourth of July, a stray firework resulted in a house fire that has potentially destroyed a home.

Around 11:30 last night, emergency calls sent five fire engines to the home at 15521 SE 179th Street in the Candlewood Ridge neighborhood. Fire fighters battled the flames, but neighbors think the house is a total loss.

“We had red lights flashing into our home until 2:30 in the morning,” said one neighbor. “They had to stay late to be sure all the hot spots were out.”

Neighbors tried to comfort the homeowner, who could do nothing but watch.

Reports were that fireworks landing on the back roof of the home started the fire. Most of the roof of the home is destroyed, and portions have fallen to the first floor of the two-story home. Officials were on site this morning to ensure the building was structurally secure.

It’s not known whether criminal charges will be filed for this incident.

Renton to Host Annual Day of Service this Saturday